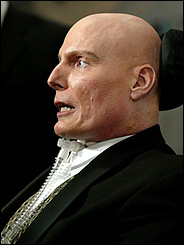 BEDFORD, New York: Christopher Reeve, the star of the "Superman'' movies whose near-fatal riding accident nine years ago turned him into a worldwide advocate for spinal cord research, died of heart failure, his publicist said. He was 52.

Reeve fell into a coma Saturday after going into cardiac arrest while at his New York home and died Sunday, his publicist, Wesley Combs told The Associated Press by phone from Washington, D.C.

Reeve was being treated at Northern Westchester Hospital for a pressure wound that he developed, a common complication for people living with paralysis. In the past week, the wound had become severely infected, resulting in a serious systemic infection.

"On behalf of my entire family, I want to thank Northern Westchester Hospital for the excellent care they provided to my husband,'' Dana Reeve, Christopher's wife, said in a statement. "I also want to thank his personal staff of nurses and aides, as well as the millions of fans from around the world who have supported and loved my husband over the years.''

Reeve broke his neck in May 1995 when he was thrown from his horse during an equestrian competition in Culpeper, Virginia.

Enduring months of therapy to allow him to breathe for longer and longer periods without a respirator, Reeve emerged to lobby Congress for better insurance protection against catastrophic injury and to move an Academy Award audience to tears with a call for more films about social issues.

He returned to directing, and even returned to acting in a 1998 production of "Rear Window,'' a modern update of the Hitchcock thriller about a man in a wheelchair who becomes convinced a neighbor has been murdered. Reeve won a Screen Actors Guild award for best actor in a television movie or miniseries.

"I was worried that only acting with my voice and my face, I might not be able to communicate effectively enough to tell the story,'' Reeve said. "But I was surprised to find that if I really concentrated, and just let the thoughts happen, that they would read on my face. With so many close-ups, I knew that my every thought would count.''

In his public appearances, he was as handsome as ever, his blue eyes bright and his voice clear.

"Hollywood needs to do more,'' he said in the March 1996 Oscar awards appearance. "Let's continue to take risks. Let's tackle the issues. In many ways our film community can do it better than anyone else. There is no challenge, artistic or otherwise, that we can't meet.''

In 2000, Reeve was able to move his index finger, and a specialized workout regimen has made his legs and arms stronger. He has also regained sensation in other parts of his body. - AP